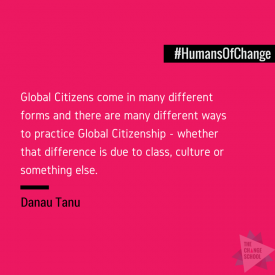 TCK Summit - Danau Tanu on THE NEXT WAVE: Global Citizens

Posted by 3 In Humans Of Change With CCK,Cross Culture Kid,Global Citizen,TCK ,TCK Summit tags With 0 Comments

Born to Chinese-Indonesian and Japanese parents, Danau Tanu is fluent in four languages and has lived in Canada, Australia and across Asia. Moving around while growing up meant that Danau spent a lot of time observing culture as a kid. Now she gets to do it for a living as a social anthropologist. Danau completed a Ph.D. on Third Culture Kids and international schools, and is a Research Associate at the University of Western Australia. She is working on a book manuscript and publishing articles based on her research. Danau is also a co-host for #TCKchat and the Commissioning Editor for Inside Indonesia.

What does the term TCK mean to you? Do you identify with being a TCK?
When I frst heard the term, I felt it applied to me but also saw the gaps. I saw that the Asian Experience in International Schools was not represented. For me, it meant being Western during the day (at school) and Asian at night (when I went back home). When I went to school in Indonesia, it also meant that I was seen as neither local nor foreigner which was confusing. I've written more about this in Writing Out of LiImbo.
Is being a TCK the same as being a Global Citizen?
I don't see the terms as synonymous. TCKs refer specifically to people growing up overseas and/or moving country to country. Global Citizen implies a sense of responsibility towards the earth and others who live on this earth. While many TCKs share experiences of mobility, there is also a lot of diversity of experience among TCKs. Many TCKs don't identify as such because the same experiences can be experienced in different ways and it's important to see both similarities and differences.
For example, the students I work with in a rural school in Surabaya, Indonesia are not TCKs but they do share a sense of responsibility to their community and they act on that feeling everyday - operating in a very local capacity for a cumulative global impact - as young Global Citizens (even if they are not seen as such).
What is the role or ‘responsibility’ of adult TCKs/CCKs as citizens of the world?
There is a bit of contradiction in the way we understand/talk about the term Global Citizens. The image is of people jet-setting around the world, living in exotic places and going to fancy schools. International school students may have more capacity and opportunity to be recognised and acknowledged as Global Citizens, but they may also create a bigger carbon footprint as a result of their abundant lifestyles and privileged education. It's important to recognize that our international experience doesn't automatically make us Global Citizens.
Global Citizens come in many different forms and there are many different ways of practicing Global Citizenship - whether that difference is due to class, culture or something else. These are the sorts of things to bring into the conversation about Global Citizens - particularly in the Asian context.
How do we cultivate a Global Citizen mindset?
It would be great to see more international schools do student exchange programs with local schools - maybe spend a week with same-age students who might come from different socio-economic backgrounds. Currently, international school students may engage with the local but it is often very much on their own terms. It's important to remember that the 'global' in Global Citizenship is not to exclude the 'local'. To cultivate a Global Citizen mindset, we need to engage the local on an equal footing. Global cannot exist without the Local in the same way that the International cannot exist without the National.
Two great resources/communities to check out: TCKid.com and #TCKChat
[Watch the Full Video]